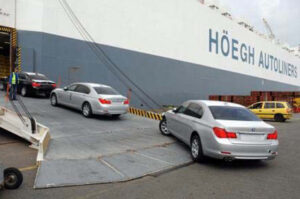 Located on the left bank of the Congo River, Port Matadi is the Democratic Republic of Congo’s Chief Sea Port. Although the majority of the country is located inland, the mouth of the Congo River forms one of Africa’s largest harbors, and allows Port Matadi, as well as Ports Boma and Banana, to exist as the country’s most important sources of exported and imported goods.

Several significant exports from Port Matadi, Democratic Republic of Congo include coffee and timber, and imports range from all types of construction and high-heavy equipment, automobiles, trucks, and more. From the United States, clients can efficiently transport vehicles of all makes and models, as well as construction equipment from companies such as Caterpillar, Kobelco, Komatsu, and Hitachi.

Some notable features for the port Matadi, Democratic Republic of Congo include: